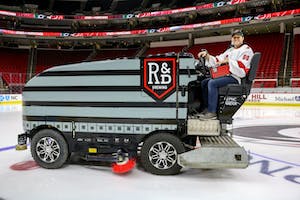 Storm Brew, The Official Beer of the Carolina HurricanesTM

Raleigh, N.C. — Today, R&D Brewing announced that they will donate a portion of the proceeds from the sale of every Storm Brew sold at tonight’s Carolina Hurricanes game, scheduled for 7:00 p.m. EST against the Dallas Stars, to a kidney foundation in honor of David Ayres. Ayres, who underwent a successful kidney transplant in 2004, will select the charity to receive the funds making it truly a cause worth drinking to.

His heroic performance as an emergency goaltender in the recent victory against the Toronto Maple Leafs is only the latest chapter in the historic story of Ayres’ life. In addition to his kidney transplant, he is an inspiration to athletes everywhere that never gave up on their dream. At 42 years old, the zamboni driver and emergency goalie became the oldest goaltender ever to win his NHL debut.

“Hockey is truly a great sport with a long history of incredible stories,” said John Glover, CEO of R&D Brewing. “David’s story is unique in that it transcends the sport and we are proud to honor his achievement with this donation. Hopefully, it can serve as an inspiration to those facing health issues or those simply chasing their childhood dream of playing in the big leagues, and that’s something I think we can all raise a glass to.”

After giving up two goals from the first two shots, Ayres was able to overcome initial setbacks and triumph in the end, much like he has done in life. His inspiring tale has even led to Raleigh Mayor Mary-Ann Baldwin officially announcing that today will be “David Ayres Day” in the city.

Storm Brew was launched at the start of the 2019/2020 season by Raleigh-based R&D Brewing and has been a hit with Canes fans in and out of the stadium. One dollar from every $5.00 16oz Storm Brew sold at tonight’s game against the Dallas Stars will be donated to a kidney foundation of Ayres’ choosing following the game.

R&D Brewing opened in 2017, using their 3.5 bbl pilot brewing system to methodically research and develop award winning beers.  That commitment to creating the perfect beer is the driving force behind the company that plans to continue expanding operations in 2020 with a new 30,000+ square foot production facility in Raleigh, N.C.  For more information on R&D Brewing and to see their full range of beers, visit rndbrewing.com and follow them on Instagram, Facebook and Twitter.