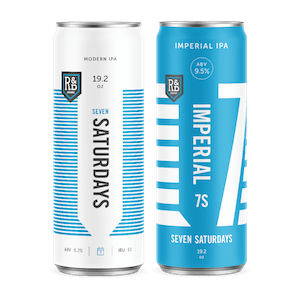 “The growth of the Seven Saturdays brand has been exciting for us to watch, creating an Imperial version seemed like a natural expansion. Offering both beers in the 19.2oz package creates a dynamic opportunity for us across retail channels and gives consumers more variety,” said Rachel Peterson, COO at R&D Brewing.

R&D Brewing is scheduled to release seasonal styles throughout the year with the first one this spring. The brewery is bringing back a consumer favorite, Remix Double IPA.  The 8.8%  Double IPA is brewed with Citra hops and Pineapple puree creating a delicious hazy, light orange beer with notes of pineapple and honey and will be available in draft and 16oz cans.

R&D Brewing opened in 2017, using their pilot brewing system to methodically research and develop award winning beers. That commitment to creating the perfect beer is the driving force behind the company’s recent 20 bbl brewhouse upgrade with plans to continue expanding operations in a new 30,000+ square foot production facility located in Raleigh, N.C. For more information on R&D Brewing and to see their full range of beers, visit rndbrewing.com and follow them on Instagram , Facebook and Twitter.